As I have mentioned in the Facebook group, to help people find information I’m posting some tutorial information.

IF YOU HAVE THE GAME ALREADY, take a look at this post. It’s something I found online. Although I’m not an OOTP expert, I’ve learned quite a bit already. As I learn more I will update the tutorials. 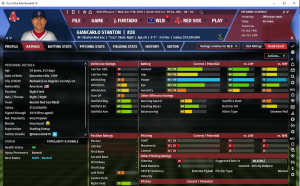 Other categories for the hitters:
Position Ratings = This is the middle box where it gives one single rating for each position the player knows how to play. It is effected by the box to the left of it, which has the players Range, Error, Arm and Turn DP.

Fielding Ratings
Range = How much ground the player can cover.
Error = How “Sure-Handed” the player is.
Arm = How strong/accurate the player’s throws are.
Turn DP = How effective the player is at turning a double play.
Ability – How well the Catcher fields his position.

Position Ratings are a product of that positions Range/Arm/Error/Turn DP (or Ability and Arm for Catchers) and the experience (rating 1-200, which is only visible in the editors screen). Experience is gained by the player playing that position.
(Note: Catchers aren’t rated individually for Range, Error and Turn DP. These are more or less rolled into one and labeled Ability. A Catcher’s Position Rating is determined by their Catcher Arm and Catcher Ability, where as the Position Ratings for all other positions are determined by the players appropriate Range, Error, Arm. Also, Turn DP is only for Infielders.)

Run/Bunt Ratings
Another Simple one.

Personality Ratings
Leader Ability = The ability to inspire others around the player.
Loyalty = How loyal the player is to the team that they are on (directly effects how much the player signs for or asks for during contract negotiations).
Desire for Winning = The desire for a player to be on a winning team.
Greed = The player’s desire for money. The higher the rating the more money he will want in contract negotiations.
Intelligence = The ability of the player to play the game with intelligence (It’s been said that a high Intel prospect develops faster.)
Work Ethic = The “Drive” that a player has. This is his competitive edge, so to speak. Prospects with a high Work Ethic tend to develop at a more successful and speedy rate then those with lower work ethics. 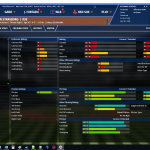 Control = The ability to “paint the corner”. Low Control = Walking lots of batters.

Pitch Ratings
Each individual pitch that a pitcher knows is rated by it’s effectiveness. In order to start, a pitcher should know at least 3 pitches. The “Current” rating is what directly effects how a player performs NOW, while the Potential is what the player COULD become if he develops.

Other Pitching Ratings
Velocity = Obviously, how hard the pitcher’s fastball is.
Stamina = The ability for the player top pitch deeper games.
Suggested Role = Where the computer suggests the player should be playing.
Hold Runners = The ability of the pitcher to not allow the baserunners to steal.
Defense = How well the Pitcher defends his position.

Run/Bunt Ratings and Personality are the same as hitters.

Viewable injury ratings are graded broadly as: Durable, Normal, and Fragile. The great majority of players are Normal.

These broad ratings are based on underlying injury ratings.

These come in four categories.

OOTP hides these “internal figures” on the regular screens. They can only be viewed using the Editor screen in Commissioner Mode (explained in a separate post).

Morale: The happiness of the player. Happy Players perform better. Happiness is determined by the players perception of:
Team Performance, Player Performance, Team Roster Moves and Expected Role on Team (as compared to actual role).

Local Popularity: How well the player is liked by the home town fans. When you let a player with a high Local Pop go, the fans are not happy.

National Popularity: How well the player is liked by fans in general. Fans like it when Nationally Popular players join their team.

Both Pop Ratings, along with team performance (both historically and current) combine for your Fan Interest. The higher Fan Interest you have, the more fans come to your games, and the more money you make on Gate Sales and Merchandising Sales.

Splits
A Player has 4 different ratings in each of the “Main Categories”.

(Splits – the difference between their vs LH and vs RH ratings.

Information copied and/or based on this great post at ProSportsDaily.com

Home of the Whalehead Baseball League. The league was established in 1990. Three of the seven original members remain active. Most of the other members have a 25+ year history.

GMs may attend on site or virtually.